On Thanksgiving, one of the things I was thankful for was writers who make me think.  All too quickly we’re mourning the passing of one of the people I had in mind when I wrote that.  Laura Hershey was, among so many other things, a poet, writer, activist, word nerd, Scrabble ass-kicker, disability-rights mentor, partner, mother, and friend.  She passed* the day after Thanksgiving. 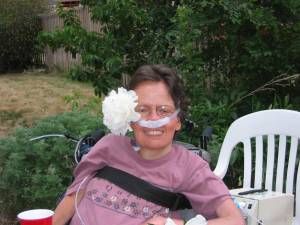 Others will write about Laura’s long history in the disability rights and LGBT communities, of working with her as a writer, or protesting with her back in the day.  My perspective is as a relative newcomer to the disability rights world, a straight, non-disabled law nerd wielding the dry prose of the legal brief in lieu of poetry or protest.  I’ll miss Laura immensely as a friend, but I wanted to write about another role she played and will continue to play for me.

Laura is an important part of my Mental Greek Chorus.  Perhaps you have one of these?  My MGC consists of the people with whom I have the mental arguments that help hone my own views on things.  (BTW, if having an MGC is a sign of mental illness, all I can say is I highly recommend it.)  Membership in my MGC consists of really really smart people who I love and who call bullshit on my views.  As you might guess, my husband and my brother are charter members.  But so is Laura.  Even though we could both be found on the left side of the political spectrum, she often challenged the assumptions in many of my views.

We disagreed on the question of abortion.  But what, I asked, do you think of people deciding to have an abortion when they learn their child will be disabled?  Her response:  it’s wrong, but we can’t force people to make the same intimate decisions we would make.

She challenged my civil libertarian views of assisted suicide.  Sure, in theory, everyone should have the same right to take his or her own life, but theory isn’t all that helpful in a world with limited support systems for people with disabilities, and a popular culture that often sends messages of pity and dependency.

And then there was the question of modesty.  As you can see from her eloquent final blog post, Laura spoke frankly about sex.  I think this is terrific — in theory.  My own conversational approach is more, um, prudish.  I recall Laura’s amusement as she described — over dinner at Little Shanghai — an art exhibit the theme of which was “what I was wearing when I had my first orgasm.”  I suspect her ongoing amusement at her and Robin’s gift of a condom and a mint when my gift suggestion for Tim had been “exotic condiments” was motivated more by how long it took me to figure out the rebus than the actual blush value of it.

On these and so many other topics, I will always hear Laura’s voice adding nuance, intelligent commentary, and good humor to my dry legal analysis.  She will live on for me in my heart and in my Mental Greek Chorus, continuing to gently, lovingly, and eloquently call bullshit.

*  After my father passed in 1997, I noticed that his southern and African-American friends all said “passed” whereas non-southerners and non-African-Americans tended to say “passed away.”  I came to prefer “passed,” because so often it feels like he is not really that far “away.”  I’m thinking Laura would smile at taking the occasion of describing her death to nerd-out on word choice.

Here are some links by and about Laura:

This link has two of her poems: