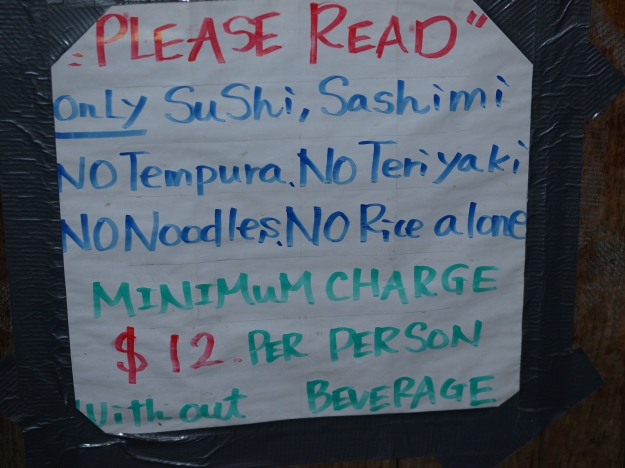 And it was magnificent!!!

This evening we went back to the completely gutted and remodeled Izakaya Den restaurant and found that they installed a raised sushi bar with no ramp.  Here’s a photo from Westword with my added mark-up.

Just that, by itself, is deeply frustrating.  As we’ve discussed in connection with our lawsuit against the El Diablo restaurant, you can’t take an empty space and make part of it inaccessible.  While this should be obvious, it’s also illegal.

But what made this depressing, frustrating, infuriating and really sad was that we have been patronizing Izakaya Den and its sister restaurant, Sushi Den, for years.  They know us in both restaurants, well enough at Sushi Den that we had a table where we always sat, and most of the waitstaff had served us so often they automatically brought me a phone book to sit on.*  We had participated in a private sushi tasting with a chef visiting from Japan, and at that point (and others) met the owners.

It’s bad enough that Izakaya Den got seriously bad architectural advice.  It’s really depressing that no one ever stopped to think, this isn’t just a theoretical legal question; we have a regular customer who will want access to the sushi bar.   And what’s funny:  they have an elevator.  They added a second floor and an elevator.  Very fucking cool.  But damn!  Why on earth add an unnecessary, new, inaccessible raised area?

We proceeded from Izakaya Den to Kaos** pizza, which was also inaccessible,  then*** on to the Black Pearl which had this gorgeous ramp 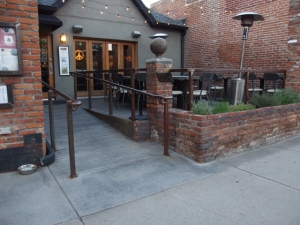 as well as truffle fries, an excellent cheese plate, and a nice refreshing bottle of 90 Shilling.

*  Yes, I’m that short and have that little pride.  But it’s nice to be able to look my fellow diners in the eye.

** Sounds like Maxwell Smart should be nearby, talking on his shoe phone.

*** I’m leaving out the part where I crossed the street from Kaos to where Tim was waiting, swearing my ass off, while he made “maybe you don’t want to use those words just now” eyebrow motions.  Turns out he was chatting with a nice woman — hidden to me by a parked car — and her cute Lab puppy.   I was embarrassed, she was understanding (“that’s OK; let it all hang out!”), and the puppy was really really cute.