I had an idea for a comedy routine that would include this derivative one-liner:  if your car is older than your paralegal . . . YOU COULD BE A PLAINTIFFS’ LAWYER!  I never came up with other humorous  Foxworthian indicia of plaintiffs’ lawyer status, so that was as far as I got.  But I would like to pay tribute to the car that inspired that hilarious line:  My 1988 Honda Accord.

January 1988:  Purchased.  At the ripe old age of 27, I had never actually owned my own car.   I had previously driven the family Fiat (in high school) and a hand-me-down Malibu — the quirks of which I have previously described — in law school.  In between, I lived on a self-contained college campus (where the Fiat was an occasional visitor) and then in Taipei, which had such an outstanding bus system that I spent three years not driving and not missing it.

Early Summer 1988:  Drove the Accord cross country to a summer associate position in Los Angeles.  For part of the journey, I was joined by the guy I was misguidedly dating at the time.  Advice for any young ladies reading this:  Young Ladies, do not attempt to teach your boyfriends* to drive stick shift cars.  If your guy does not know how to drive a stick shift car, my advice is just to dump him now, as it suggests that he is too coddled to make good boyfriend material.

Late Summer 1988:  Drove the Accord back across country to start my clerkship in VA.  Picked up step-brother in Santa Fe.  Based on fear of step-brother’s driving record (love you, Jeff!), undertook to keep the wheel to myself during a three-day dash from Santa Fe to Arlington, VA.  Another lesson learned:  you cannot get off the highway in Oklahoma and expect to get a good steak at a random steakhouse.  Yelp.com didn’t exist in those days.

1988-89:  Lived in Richmond for my clerkship.  The Honda acquired the trunk gash it still bears today from some klutz’s attempt to attach a bike rack and (what the hell) a bike to the back of the car.

September 1989:  Drove to Minneapolis based on misguided relationship.  See supra.

February 1991:  Escape vehicle from misguided relationship.  Driven at great speed from MN to VA.  Stopped in IL to visit law school roommate, whose two-year old painted me a picture, which I put on top of the worldly possessions stuffed into the car.  To this day, I think of that 2-year-old (who, I believe, just graduated from college) every time I look in the rear view mirror and see the glop of yellow paint that remains from the inevitable moment when the picture flew up from the worldly possessions and adhered to the back window.

January 1992: Spun out in the snow driving to first date with Tim.  I remain very grateful that the Honda righted itself and I made it to the date on time.  Tim received early warning of my driving skills.

Later in 1992:  Acquired a “Clinton for President” bumper sticker, which would, even later, be covered with an X of duct tape when . . .

1993:  I loaned the Honda to my conservative brother.  It spent several months as the vehicle of choice for my sister-in-law to transport my newborn nephew — who is now 17 — as it had four doors to her CRV’s two.  That meant I got to drive around in a sporty red CRV for a few months.

1995:  Traveled to Denver in the back of a moving van.  I think it is still pissed at me for that.

Since 1995, the Accord has seen a lot less driving time, as Tim and I commute in the van.  It is now missing its hubcaps and the trim on the passenger side, which largely means that no one — no one — ever challenges me when I want to change lanes.  A few years ago, when I parked it on the street in front of our house for one night — it usually lives in the garage — someone broke the driver’s side window and crowbarred the original equipment radio and cassette (cassette!) deck out of the dashboard.  This had to have been the single most pointless and annoying crime in the history of crime, as the criminal ended up with a P.O.S. sound system, and I discovered that the cost of replacing that part of the dashboard — even without a new radio — exceeded the book value of the car. Luckily the thief left the lighter socket, so sound now comes from a jerry-rigged system involving a DC to AC outlet adapter and my smart phone. 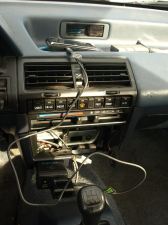 From time to time, we talk about replacing the 88 Accord, but it never gives us a good reason to do that , and honestly I’m not sure how I’ll part with it.  Although automotive technology has advanced considerably in the past 23 years, I think the only thing I really miss is:  a cupholder.

***************
* Upon rereading, I recognized the heterocentrist assumptions underlying this sentence.  So to clarify:  advice for any young ladies dating young men.  I do not have any data on the advisability of young ladies trying to teach their girlfriends to drive manual shift cars.