As will soon be tediously clear, I have started taking photography classes.  Not for the first time, either.  I got a serious 35mm camera* for high school graduation, took a class at the local rec center, and somehow convinced myself I knew what I was doing.  There ensued some deeply meaningful but thoroughly awful photographs, including a few that got published in the Swarthmore college newspaper after I beat out a highly competitive field of approximately zero other people for the title of Assistant Photo Editor.  So not kidding.

Herewith an example of my deeply artistic but pathetically incompetent college photography and dark room skills:

I carried the camera around campus for four non-contiguous years and then around Taiwan and other parts of Asia for the next three non-contiguous years, taking the occasional brilliant photograph, and boatloads of expensive-to-develop 35mm crap.  Actually, one of my funniest sets of travel photos was from a cross-country drive I took somewhere in the middle of law school, in which I guess I discovered real mountains for the first time, because I have close to an entire roll of slides devoted to distance shots of fields, lakes or — most commonly — the road with mountains in the background.  I now call that “the view from my morning commute.”

A few years ago, Tim gave me a seriously good DSLR camera and after spending too long using it on “auto” while trying to remember what the eff an f-stop was, I decided earlier this year to take a class.  I’m having a blast!  The first round of classes — Digital 101 at Illuminate Workshops — reacquainted me with f-stops, shutter speeds, and ISO, introduced me for the first time to the majority of the buttons and data on my camera, and then moved on to a long-overdue introduction to composition.

We had homework, which like a good little student nerd, I did.  For the first class, the instructor asked us to experiment with shutter speed and aperture: 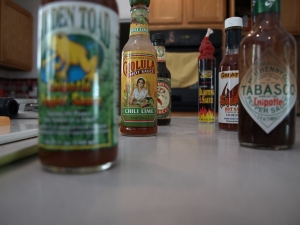 For the second class, we were supposed to take a portrait and a “macro.”  Oh, and I forgot to mention, the instructor displays and critiques our photos.  My classmate Gabriela went first. Her macro was a stunning photo of a jade bracelet on a mirror.  Her portraits looked like this:

The reason her portraits looked like this is because SHE TOOK THIS PORTRAIT!  Why, might you ask, is Gabriela in Digital Photography 101?  No clue, but she is hilarious and asks great questions, so I’m glad she’s there.  For example, had we not reviewed Gabriela’s boudoir photo of a shapely — mostly naked — woman photographed from behind, I would not have learned that to get good photos of a naked tuchis, you have to request the owner of the tuchis to, um, clench.  The class discussed this in a professional manner, while I exerted superhuman effort not to snicker.

But then it was my turn.  Here is my macro homework . 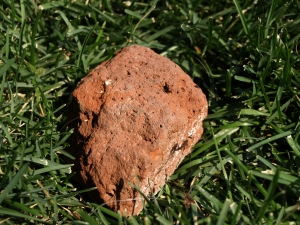 Seriously.  We went from jade bracelets and naked tuchii to, um, a rock. Luckily my portrait homework was of my mother-in-law, so I held my own in that division!  (Though, for the record, she was fully clothed.)  The instructor was very kind to my rock, but did use it to start to teach us how Photoshop can be used to make photos more interesting.

So I’m planning to use the blog to post my photography practice from time to time, and I’m putting all of what I think of as my more interesting practice photos on Flickr, so if you’re really bored, you can hop over there and take a look.  I’m partial to architecture and abstract and averse to portraits, so there will be lots of stuff that looks like this:

Which likely only I find interesting.  Still, the occasional “ooh” or “ahh” in the comments would make me smile!

* My photography instructor – and most of the world, I gather – would now call it a “film camera,” because of course in 1978, we didn’t have digital cameras.  If I recall correctly, this is called – in the linguistics biz – a “back formation.”  I love back formations.  Think about it: acoustic guitar; snail mail; chicken fried chicken.  I’m not sure about the last, but I love it just the same.

10 thoughts on “Does this make me an Illuminati?”