I have finally started on the project of archiving and (selectively) scanning my father’s photographs.  He was an avid photographer, if by “avid” you mean “relentless.”  In a pre-digital age, when developing photos was costly and time-consuming, he would take massive numbers of similar photos.  I can’t remotely imagine what his archive would look like had he lived to own a digital camera.

His photos span his own teenage years in the late 40s and 50s to the years just preceding his passing in 1997.  From skinny ties 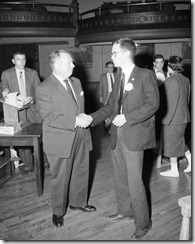 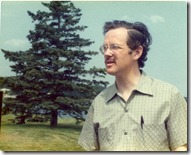 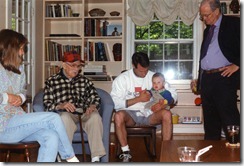 The organizing challenge is also more intense for more recent photos, that is, those taken after One Hour Photo began offering two-for-one prints.  Dad often got three- or even four-for-one, resulting in giant stacks of photos for each roll, or more frustrating, duplicate rolls scattered throughout the collection.

I should have taken a picture of the starting point:  three large (3’ x 3’ x 3’) boxes of unsorted photos — most stored in all of the variations on envelopes that developers used from the 40s to the 90s, but many loose photos and negatives as well.  I have now gone through all of the photos that remained in envelopes and more or less figured out their year or at least decade.  This process brought home the need for some sort of consistent way to organize them — and a search for what turns out to be a rare thing:  a no-frills way to store large numbers of photos.

A search for “photo envelopes” yielded sites willing to sell me heavy-duty envelopes just thick enough to mail one presumably very important photograph, but no envelopes sufficient to hold a roll of 36 (or 72 or 108) photos.  I moused around for a couple of days, and then hit our local Mike’s Camera to see if perhaps they sold in bulk the sort of envelopes you used to get your developed photos back in.*  They didn’t but the guy behind the counter recalled he’d purchased them in bulk back in the day when his store actually developed photos.  He had the name, no!, not the name, but he did have the 800 number.  And bless the internet, a search on the 800 number took me to the Mackay Mitchell Photopak company, which sells “print boxes,” 100 for $25.10, in two sizes.

So, I figured, I had just been using the wrong term.  Clearly all I’d have to do would be to search on “print box” instead of “photo envelope” and I’d have a wide range of choices.  Not!  Here are typical results for “print box”: 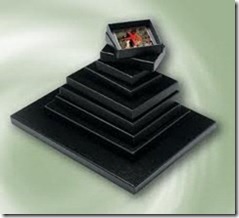 And here’s where I blame scrapbookers:  it is apparently no longer acceptable to store photos in cheap, plain, buy-in-bulk envelopes or thin cardboard boxes.  They have to be archived — no, make that “curated”** — in something cute, expensive, and space-consuming.

I placed my bulk order with Mackay Mitchell.

This post took a sort of unexpected Andy Rooney turn, so I’ll wait til the next to start posting some of my Dad’s more remarkable photos.

* Yes, I did that grammar on purpose.  Grotesque but sorta cool, no?

** It will not surprise you to learn that I’m planning a post on the overuse of the word “curate,” which has escaped its home in the museum and wandered off to cover any set of two or more things that someone has chosen to put side by side for any reason in any medium.  For example, “I curated my eggs and toast this morning.”  See!  How awesome is that?!

Christopher Buckley’s Losing Mum and Pup is a wonderful book for many reasons.  For example, anyone who has kept a vigil for a loved one in the ICU will not want to miss Buckley’s hilarious updates from his father’s hospital bed.  But the part that rang the truest for me was his description of his father’s devotion to WordStar.  Remember WordStar?  William F. Buckley was apparently an early user of this ancient word processing program, and would be goddamned if he was going to give it up, even as it required extensive and increasingly energetic technical support.*

My father, too, was an early-adopter/never-let-goer.

Throughout our childhood, he always talked about wanting to be the first kid on the block to have a Buck Rogers Ring.  I think that was something related to a comic book that came in a cereal box or something.  Bruce and I did what we always did with pronouncements like this:  ignored it.  Turns out it would not have been a bad thing if he had actually gotten a Buck Rogers Ring and, say, held onto it so he could bequeath it to his kids:  http://www.hakes.com/item.asp?Auction=199&ItemNo=86752

Anyway, Dad led the pack in buying things like a Polaroid camera.  The first one looked like this:

and required him to apply some vile smelling chemical** to the photo with a tiny squeegee.  The final Polaroid camera looked like this:

and produced color photos that would develop before your eyes.  I think that was the last camera he owned.

Dad was also a very early adopter of the cell phone.  He was a big telephone talker, which was really annoying when we had kid activities on his agenda and he just had to finish up a few more words with, say, Al Blumrosen, but a huge boon when I was living in Taiwan and he was willing to ignore the killer international phone rates to call up and chat.  The cell phone opened up vast new parts of his life during which he could talk on the phone, though it often seemed that its primary use was calling us from the driveway to help him carry things into the house.

Kids today probably barely remember roaming charges; back when my Dad bought his first cell phone, there were roaming numbers.  To contact a cell phone owner who had traveled away from home, you’d have to dial some sort of access number first.  As Dad drove from Washington to New York — a trip he made often — we’d have to guess where in the journey he was and call the appropriate number:

My favorite example of his early adopting/not let going was his word processing . . .  machine.   Dad had a very early word processor called a Lexitron, and in my memory it had green text on a black screen and was approximately the size of an upright piano.  A Google Image search reveals that I was only slightly off on the size: 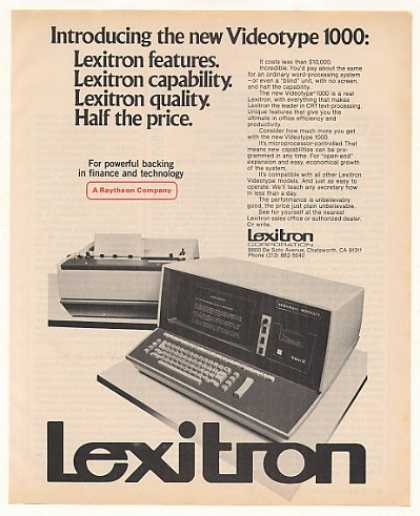 Dad started using this beast sometime in the late 70s or early 80s.  As I recall, the only advantage the Lexitron had over a typewriter was that you could draft your document on the screen before printing it.  While that was a huge advantage, you had to do all the formatting manually:  hard returns; footnotes; pages; etc.

When he passed in 1997, the machine was still in his office.  While his secretary had kept up with PC technology, he had never moved on from the Lexitron’s green and black screen.  She later told us that when she showed him how to put a music CD in her desktop PC, he exclaimed, “the typewriter is playing phonograph records!”

From time to time, I try to imagine what he would think of the technological world as we now know it.  The summer before he passed, he sent his first email and looked at his first website.  He just couldn’t understand what all the fuss was about until I found a copy of the Code of Federal Regulations online in a click or two.  Government nerd catnip!

I’m guessing he would be a staunch defender of books printed on dead trees rather than streamed to a tablet, Kindle, or iPad*** and that the world of Facebook and Twitter would have been lost on him.  But I think he would have been a world-class texter.  He loved his cell phone primarily because he loved to stay in touch with people and he was a big writer of long, newsy letters to my brother and me, and to other family members.  I’m guessing the ability to write to his kids and grandkids from his cell phone would have been irresistible.

**********
*  This is not comparable to my continuing use of WordPerfect, which I do not because I am an aging conservative political commentator incapable of keeping up with technology, but because WORDPERFECT IS A BETTER PROGRAM.  Think of it this way:  Word is McDonald’s; WordPerfect is your local farmer’s market.

** Who are we kidding?  I LOVED the smell of Polaroid developing chemicals, almost as much as I love the smell of magic markers!

*** He often opined that if God had intended baseball bats to be made of metal, He would have made metal trees.  I’m guessing the response to the Kindle would have been similar.

UPDATE:  My brother has a “camera museum” of Dad’s old cameras and reminded me that one of his real early adopter feats was the Minox:

I’m guessing he got this in the 50s or 60s sometime.   Maybe we really were a Russian spy family!

Bruce also had a photo of the actual original Polaroid:

I would also like to note that we have a history of museums in our family.  None of us is very good at getting rid of things, even when we replace them.  For example, the kitchen in our summer house featured a toaster museum: 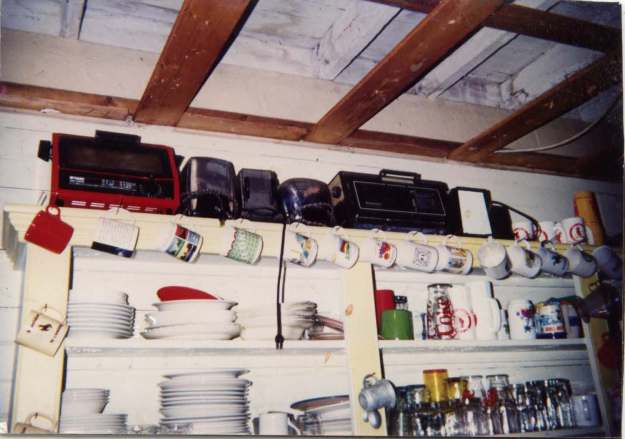